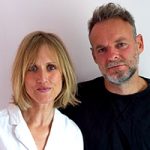 Junior Cooks Club is our new collaboration with Cook School. We chatted with the Cook School co-founder and award-winning food writer and cookbook author, Amanda Grant, to hear more about what inspires her when it comes to food and cooking.

How did Junior Cooks Club come about?

Back in February this year World Cancer Research Fund (WCRF) got in touch with us to talk about our work in schools, and right away we were excited. WCRF is an incredible organisation and with the expertise that they have in their field combined with our expertise, working with them was an easy decision to make.

It’s a great fit – we’re both totally passionate about educating about good food. Diet can have such a huge impact on our health, and it’s so important to eat healthily, but it needs to be easy, accessible and afforable too, otherwise those lessons can easily fall by the wayside. WCRF liked our approach, which is to teach young people how to cook, independently, simple, healthy meals that are, most importantly, delicious.

With both parties working together, we can reach more schools, and more children. It’s genuinely exciting.

Why is children learning about food and cooking so important to you?

The benefits of getting children into the kitchen are huge – it goes way beyond them giving a hand with the washing up! It’s a life skill – we all have to eat every day, and if you learn how to cook, you’re likely to have a much more enjoyable life ahead of you.

Teaching children how to cook vegetables also encourages them to eat a much wider variety. You’d be amazed how much more keen a child is to eat a salad they’ve helped prepare themselves. It demystifies things a bit.

It’s sociable too, and even helps children practise their maths, literacy, geography, art and science; reading recipes, measuring, weighing, exploring where ingredients come from… It’s all there.

Why partner with us?

Both my family and my partner Kristian’s have been affected by cancer. My mum died of cancer aged 54, and Kristian’s mum is a survivor of breast cancer – she was diagnosed at the age of just 39.

One of the driving forces behind Cook School has always been to help children understand food and how it affects their bodies, and to learn how to eat a varied diet that will help them to live healthier lives as they grow up. We know just how important our diet is, and want to make sure children have the best start in life.

How do you devise the recipes that you teach?

We put a lot of thought, development and time into each recipe, and test them really thoroughly. We also involve children throughout the process, from ideas to testing, asking our own children for feedback as well as children from all over the country. Our classes are for students aged from 5–19 years old, so they have to appeal to everyone.

For example, when we were developing our veggie samosas, we had to work out a way of making assembly as easy as possible for little hands, which is when we came up with the idea of using tortilla wraps. We also needed to pick a combination of veg that would be both familiar and exciting, so we decided to combine carrot and courgette with spices and mango chutney for extra flavour.

We use accessible ingredients – we want everyone to be able to cook these dishes again when they get home. We also include food from all over the world, from pasta and polenta to curries, Mexican, and Vietnamese street food.

What’s your most popular recipe?

That’s a tricky one. Without wishing to toot our own horn, all our recipes are relatively quick to prepare, and are meals we think the whole family will enjoy eating together, so they’re all pretty popular. But, based purely on numbers, our veggie lasagne (below) probably tops the list with over 35,000 downloads.

It’s based around a delicious, no-cook tomato sauce that can be used for loads of other recipes, which is layered with cheese and spinach for an oozy, veggie treat. It’s especially popular with students and children.

What are your top tips for parents to get their children to be more adventurous with food?

First, never offer children an alternative at meal times. The family should all be eating the same things.

Second, get children involved in making food themselves. That doesn’t have to mean making a whole meal – it can be washing and peeling veg, weighing pasta, opening tins, tasting ingredients while cooking… Eventually, you could find them wanting to make meals for the family by themselves, which is so cool.

What’s the most memorable thing that’s happened as a result of a cooking class?

Almost every day a child will say something to us that gives us a huge boost, and reminds us why we’re doing what we’re doing! But two moments in particular still give me goosebumps every time I think about them.

In January, we were working at a pupil referral unit in Birmingham. One boy, who’d been excluded from school because of his behaviour, was reluctant to join in with the Cook School classes at first. But by the end of the session, he was totally absorbed. When he left at the end of the day, he forgot to take his food home with him. Twenty minutes later he came back, soaking wet from the rain, to collect his meal! The centre couldn’t believe that he’d returned. He was so unbelievably proud of his achievement and is still on the course today, months later.

On another occasion, a headteacher rushed into the room and started filming a boy as he was eating some cherry tomatoes. She told us she wanted to record the moment for his mum as, until then, he’d refused to eat anything other than bread and butter sandwiches. It was such an amazing feeling to know we’d made a difference. 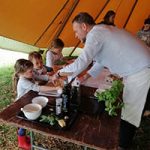 What is the most important issue today relating to children’s health?

Childhood obesity is a huge issue, and one which we urgently need to tackle. One in five children in the UK are overweight or obese when they start primary school, which rises to one in three by the time they leave. Children who are overweight or obese are more likely to be so in adulthood too, which leads to a greater risk of cancer, diabetes and heart disease.

Eating a healthy diet is a crucial part of having a healthy lifestyle overall. We know from our experience that one way to create healthy habits from a young age is to educate children about food and how to cook.

Goodness, this one’s almost impossible to answer! I like most things, to be honest –  although because I’ve spent a lot of time in Italy, I do have a soft spot for Italian food. I was asked to write a children’s version of the best-selling Silver Spoon, an iconic Italian cookbook from the 1950s, which I’m particularly proud of. I spent hours in Italian kitchens as part of my research.

I also have a passion for French and Spanish dishes, so I guess I’m very influenced by Mediterranean cooking. Kristian’s parents live in France, so we tend to spend as much time there as possible, too.

What will be on your plate this Christmas?

Kristian and I have five children between us, and everyone will pitch in to help make the Christmas meal. Our own version of a veggie Wellington is definitely on the menu, with little twists on the traditional accompaniments. The girls will definitely be making cinnamon buns to start the day, and there will be an array of desserts made by all.

What does the delay to UK junk food legislation mean?
Our Impact
Impact Report 2020-2021
Strategic partnership will strengthen understanding of nutrition and cancer
Cancer over the past 30 years

What does the delay to UK junk food legislation mean?

Putting plantain on the menu: the African and Caribbean Eatwell Guide

Metabolites: our research into how obesity can cause cancer