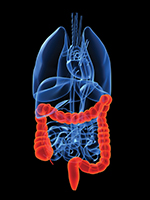 Bowel cancer is the UK’s fourth most prevalent form of cancer and the second biggest killer. Its discovery is sometimes a cause for embarrassment, which partially explains the high number of cases that are not identified until the disease is at an advanced stage. But aside from looking for symptoms of bowel cancer in the toilet bowl, there is a lot we can all do to protect ourselves from this form of cancer.

This is Bowel Cancer Awareness Month and the great news is that bowel cancer – also known as colorectal cancer – is one of the most preventable forms of cancer. Nearly half of all cases in the UK could be prevented every year – more than 20,000 cases – if we all kept at a healthy weight, followed a healthy diet, were more physically active and didn’t drink alcohol. Even relatively small steps in the right direction, such as cutting down alcohol intake, would reduce a person’s risk of developing bowel cancer. These figures would be even higher if you take into account another risk factor, namely smoking.

The even better news is that these changes to our lifestyles would also protect us against a number of other common forms of cancers, as well as diseases such as type-2 diabetes and heart disease.

Men, in particular, are at risk of bowel cancer with figures from the International Agency for Cancer Research (an agency of the World Health Organisation) showing that, in the UK, men have a 50 per cent higher chance of getting bowel cancer than women (36.8 cases per 100,000 compared to 24.4).

This is largely because although men are more physically active than women, they also drink more, eat more unhealthily, smoke more and are more likely to be overweight than women.

How to reduce risk

So, bowel cancer risk can be significantly reduced by changes to our diet and lifestyle. Below we’ve outlined the main changes we can all make to cut our chances of getting the disease.

What to look out for

The symptoms of bowel cancer may not appear during the early stages of the disease and symptoms in the later stages are shared with less serious conditions such as haemorrhoids. But you should see a doctor if you notice any of the following symptoms:

Although these symptoms are unlikely to be due to bowel cancer, these types of symptoms need to be investigated further so see your doctor to be on the safe side.

Download or order our leaflet on bowel cancer prevention for more advice on how to protect yourself against bowel cancer.